Just letting you all know what to expect from this rambling artist!

Following on from Jodie’s post you can tell I’m not the writer of this duo, Jodie is! Check out her amazing work (including reviews of books and movies, and her written stories) on her blog site and Insta. So you might be wondering what I’ll be adding to this blog…….?

Well I’ll be writing my art processes down for how I approach the #LDC prompts. This includes things like set ups for doing the prompts, mediums used, thought processes/where ideas come from, visual bits and pieces etc. I also have a tendency to add side notes here and there so you get to see my inner thoughts….hence rambling artist (it’s not a love of walking). I’ll also be showing my processes as I go along on Instagram.

So if you’re more of a quick snippet visual person feel free to check out my Insta where I’ll be adding process videos, livestreams and process pictures. Or do both, follow on here and Insta (best of both worlds!).

We’ll be following the same prompt, and it will change week to week.

Oh yes, at long last March is finally over. Like a Game of Thrones winter or a Brooklyn Nine-Nine sinkhole season, it felt like it would never end. But end it did, and it is now April 1st – otherwise known as April Fools!

As always, I’ll be scribbling away and Laura will be flexing her drawing muscles, so stay tuned for posts from both of us as we tackle this prompt.

In the meantime, you can follow Laura on Instagram as Tygerkillidesign, and you can see more from me both on Instagram and on my own blog!

Hey readers, Jodie here with some exciting news! The LDC girls are back, and we’re ready and raring to get creating!

Laura and I had a big ol’ chat the other night and decided that now’s the perfect time to start creating again. Laura’s working from home these days and I’m unemployed (apparently bowling alleys and laser tag arenas aren’t considered essential services??!!), so we really don’t have much of an excuse!

We’ll be doing weekly prompts for the rest of the year, and we’ll be announcing our first one on April 1st! Check back then to see what we’re working with!

So this year we’ve created a challenge to start off a productive year, or at least the first month!

Each day, we’ve challenged ourselves to come up with a small piece (a sketch for myself and some wordy scribbles from Jodie) based on a series of random word prompts we created!

The challenge is mostly Instagram based, but after a nudge from Jodie I thought it might be a good idea to make use of the blog too. Not for every day posting but might be worth showing thought processes for prompts, as well as going over final ideas for some of my favourite pieces. So if I’m honest the biggest bit was how to tackle how this works for everyday…..I am not the most organised person in the world!

END_OF_DOCUMENT_TOKEN_TO_BE_REPLACED

Each day, we’ve challenged ourselves to come up with a small piece (a sketch for Laura and some wordy scribbles for yours truly) based on a series of random word prompts! END_OF_DOCUMENT_TOKEN_TO_BE_REPLACED

It’s been far too long since I posted anything up here and – sorry Laura! – this isn’t even an LDR prompt!

The piece came from constantly clicking the random article button on Wikipedia and finding the page dedicated to Italian actress Mariella Lotti. According to Wikipedia, she had an affair with King Michael of Romania during the Second World War, which then led me to page that said she’d run off to a convent when he’d announced his engagement to another European royal, which THEN went on to say they’d never been in a relationship at all. PHEW!

These few words are basically historical fiction inspired by whatever little grain of truth lies at the heart of that tale – I imagined a lover who was mistaken for the King, a few stolen nights back in Lotti’s home town, and a good giggle at the news story. Plenty of liberty taken with dates, of course!

To be honest, I was really split about posting it because it’s teeerrriiibbllleee and ends really quite abruptly, but since writing romance and building relationships is something I want to work on, every little helps right?

She took a long draw of her cigarette and looked out across the city from the balcony. A gentle breeze moved through the air, shifting the skirt of her nightdress, shaking the thin curtains. It moved towards the man, spread out on the bed, lightly ruffling his tousled dark hair. She heard him stirring behind her, his body moving in the sheets as he stretched and reached out for her, only to find her gone.

“Come back to bed,” he said. She looked back at him over her shoulder and smiled. He switched to Italian. “Torna a letto,”

“Better you sleep alone than me reward that butchering of my language,” she said, laughing, before turning back to the view.

END_OF_DOCUMENT_TOKEN_TO_BE_REPLACED 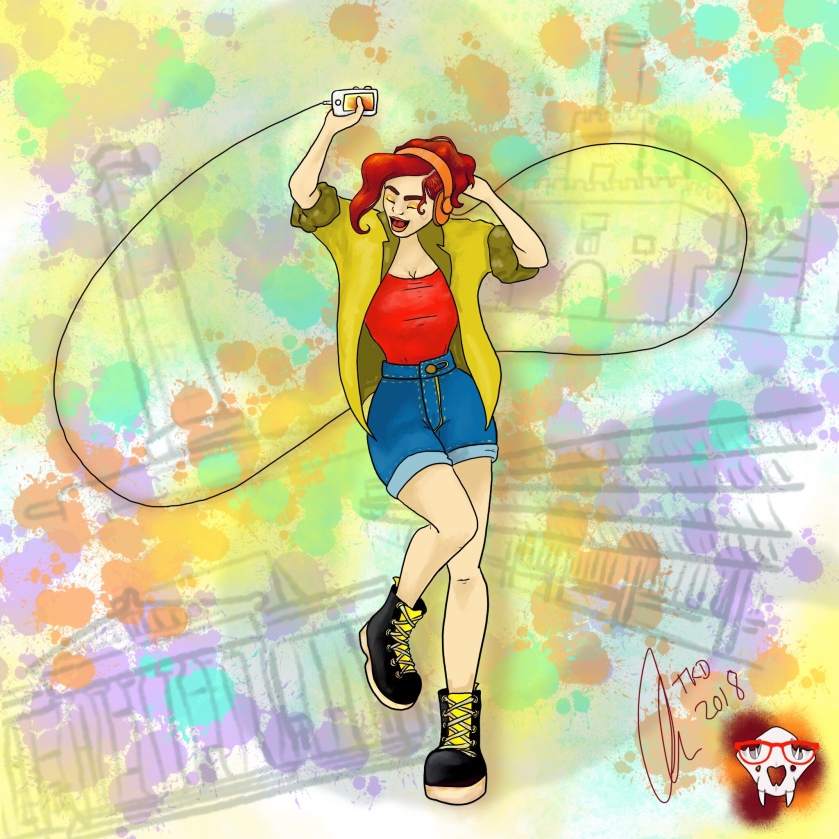 Here is my third prompt – Illustration using inspiration from Iglu and Hartley music.

This was an interesting prompt, purely cause it’s music based..I find some inspiration from music but mainly my muse is from visual cues so this was an awesome challenge.

The music had to be from Iglu and Hartley (It was like the soundtrack to my late teens) after listening to the album ‘&’ a few times over, decided on ‘In This City‘ – it just makes me feel happy every time I listen to it, sooooo many memories from late teens/early 20s.